How are the Estimated Hours Calculated in Factorial?

Understand where to access estimated hours and how they are calculated.

Estimated Hours are the hours an employee is expected to work as determined by their contract during a weekly, monthly or annual time period.  Factorial considers that the employee works the same workload every day. This value is defined by the number of hours worked per week and the days of the week the employee works.

💡The visibility to which you access estimated hours will be influenced by the features in the product that are enabled.

There are 3 different ways of accessing Estimated Hours:

🟠 If you do not have Shift Management and/or Work Schedules enabled, the only way you will be able to visualise the Estimated Hours of your employees will be via their contracts.

In this example, the employee works 6 hours per day instead of 8 hours.

Therefore, the calculation of estimated hours that appears in Time Tracking will be the correct one in case that Andrea has a regular distribution of hours during the 5 working days marked in her contract.

💡Without Shift Management being enabled, you will be able to visualise estimated hours via work schedules or employees contracts.

⚠️When Shift Management is installed, you must create and publish shifts for your employees in order to have estimated hours diffused. Otherwise, without creation and publication of shifts, employees estimated hours will be of 0 hours. 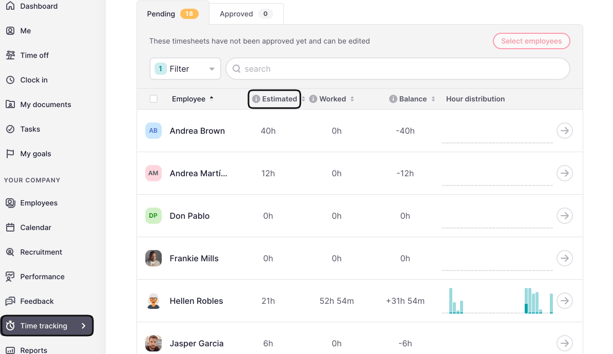